Anyone who has visited Seremban would have surely seen an iconic building with Minangkabau architecture, right along Seremban exit of North South Expressway. It is the State Museum of Negeri Sembilan. The museum complex has three different buildings. One is the museum itself, which is a two-storey building that houses the galleries. There are also two other buildings, the Ampang Tinggi Palace, which is a palace built in the 1860s, and Rumah Negeri Sembilan, a model house of Negeri Sembilan Malays.

Main Gallery
This two-storey building houses all the displays in this museum. Vast majority of artifacts and historical write-ups are tied to the state of Negeri Sembilan.  Around the front desk area was the historical accounts of Negeri Sembilan's formation. It is divided into nine districts, or 'luak', hence the name Negeri Sembilan (State of Nine). There is a list of popular touristic destination in the state.

Around the same area, there is a detailed write-up of Adat Perpatih, which is the customary laws of the Minangkabau ethnic. The Minangkabau people originated from Sumatra and are believed to be the earlier settlers in Negeri Sembilan.

After the front desk area, I started traversing the gallery from the left side. First section was the write-up on the prehistoric Negeri Sembilan. There were stories about the megaliths of Pengkalan Kempas. The location where the megaliths were found is believed to be an ancient burial site. We can also read about the legends of the Orang Asli community who settled in Negeri Sembilan. Others were stories about the arrival of Minangkabau people and also the arrival of Islam to this state. 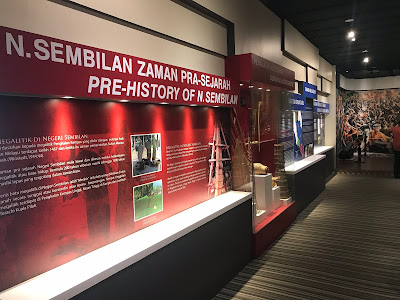 In the subsequent section, the were write-ups about the Portuguese and Johor Sultanate era in Negeri Sembilan. This was followed by the write-up on the Bugis threat and then arrival of British.

In the 1869, there was a struggle for throne of 'Yamtuan' between Yamtuan Radin Tengku Antah and Tengku ahmad Tunggal. There was a write-up about the reason for this struggle and how it was resolved. 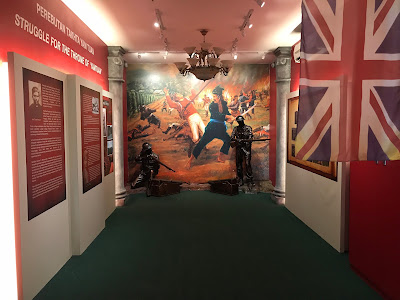 Other write-ups in this gallery was the story of how tin and rubber industry was developed in Negeri Sembilan before independence. There were also some photos and other items from the British era displayed. Other than that, there was a story of Shamsiah Fakeh, who was one of the leaders of Malayan Communist Party. She was born and raised in Negeri Sembilan. 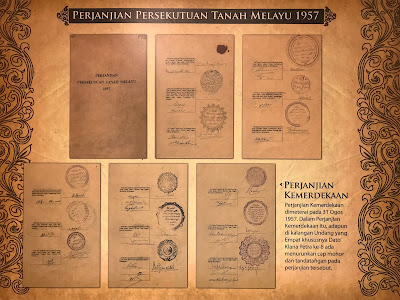 First Floor
To get to the first floor, visitors have to exit the building and climb the wooden staircase next to the entrance. In this floor, there were two galleries, Galeri Adat Perpatih and a temporary gallery as a tribute to Malaysia Day. In the temporary gallery, life sized cutouts of past and current Prime Ministers of Malaysia were displayed plus various stories related to independence. The Galeri Adat Perpatih was a special gallery dedicated to the customary laws of the Minangkabau people.