The Orang Asli Crafts Museum houses the handicrafts of Orang Asli, or aboriginal people of Malaysia. It is situated inside the National Museum complex, but in a separate building. The entrance ticket has to be bought separately, however it only costs a measly RM2, the same as National Museum. This fee is also to visit another museum located on the floor above, the Malay World Ethnology Museum.
The museum was only one floor, and the galleries were not clearly categorised. However, I noticed that it was split into a few sections for idols and masks, traditional weapons, musical instruments, decorative items and daily use items.

Section 1 - Idols and Masks
This section started off explaining the settlements and different sub-ethnics of Orang Asli community. They are divided into three sub-ethnics, Negrito, Senoi and Proto-Malay, and each of them have six tribes, which means there are a total of 18 Orang Asli tribes all over Peninsula Malaysia. Many of handicrafts displayed in this section were made by the Mah Meri tribe, of the Senoi sub-ethnic. In the Orang Asli community, the idols are used to summon extraordinary powers during healing processes. The diseases is supposedly to be transferred from the person to the idol. The masks, on the other hand, are used for ritual dancing when their ancestors' spirits. 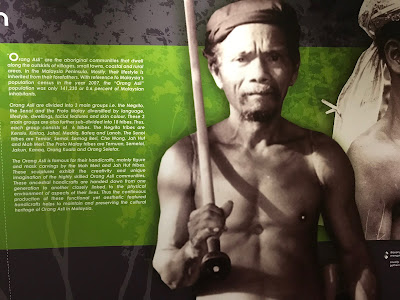 Section 2 - Traditional Weapons
The weapons used by Orang Asli are for hunting animals and as protection. The most famous one is 'sumpit' or a blowgun, which is a weapon of pride for the men. A family's sumpit is passed down from generation to generation. Younger members of the family learn the technique of using sumpit from their elders.


Section 3 - Musical Instruments
Orang Asli have their own set of musical instruments, made of natural resources like wood and animal skin. There is one particular flute-like instrument called 'pengsol' that amused me because it is played nasally.

Section 4 - Accessories
The accessory items are made of resources found in nature. Even the clothes are made of tree bark.  Accessories are worn not only for aesthetic purposes, but also to avoid natural disaster and fend off malevolent spirits.

Section 5 - Daily Use Items
These are handmade utility items like food containers and floor mats. These are crafted using mengkuang leaves, pandan leaves and rattan. A close look at these items will reveal the intricate craftsmanship of Orang Asli.

Conclusion
It exceeded my expectation really because there were a lot of original items being displayed instead of just stories and descriptions. There is a lot to learn here even for a Malaysian especially a city dweller.