While looking up the list of museums in Malaysia, I came across just one museum that lies in the northern state of Perlis. So I decided to drive up there one weekend, spent a night in Kangar, and visited not only the Kota Kayang Museums but also few other places in Perlis.

I didn't expect to find many interesting artifacts on display in this museum but I was proven slightly wrong. There were actually quite a lot of items and the museum area was much bigger than I thought. There were three single-storey buildings for the galleries, one office building and a nice garden at the back. On the left was a burial site of the 15th Sultan of Kedah, Sultan Dhiauddin Mukarram Shah 1. This area back in the 17th century was the site of a palace called Indera Kayangan, where the royal family of Kedah resided (Perlis was once part of Kedah).


In 1998, there was an excavation carried out in this area. The excavation site has now been turned into a car park. At the time of my visit, my car was the only one parked there.  Visitors are required to keep their shoes outside before entering in any of the buildings. There were in total five galleries, three of them in one building, the one in the first photo. They were History Gallery, Archaeology Gallery and Weapons Gallery. The other two galleries were in their own buildings, Royal Gallery and Cultural Gallery. None of the galleries had anyone at the front desk and obviously no entrance fee. 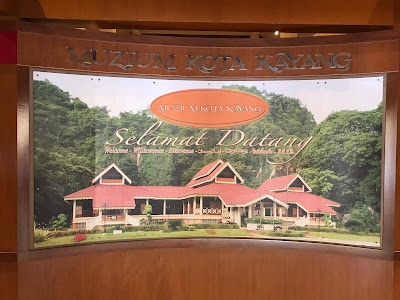 History Gallery
This gallery, as the name suggests, had the visitors understand the history of Perlis. It is a fairly young kingdom compared to other Sultanates in Malaysia, so there's little wonder that the History Gallery starts with the story of how Perlis was created in the 19th century, with the Sultanate of Kedah being divided into four provinces. Other stories were about the British administration of Perlis and the invasion by the Japanese. There were limited artifacts like rifles and hats used by the colonial armies. 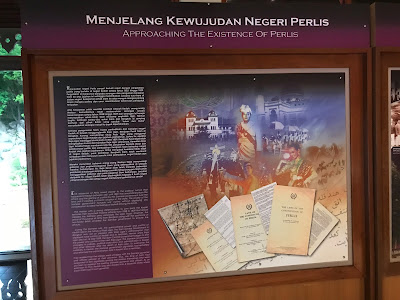 Archaeology Gallery
Here, again, there were more textbook explanation historical locations in Perlis than artifacts. The limited findings displayed include broken ceramic and some pieces that looked like bones. But there were no description about this. Most items on display were actually replicas. 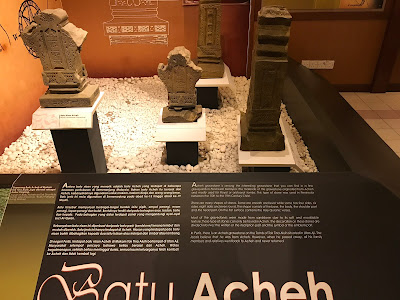 Weapons Gallery - The traditional Malay weapons were displayed in this gallery. All of them were replicas with even the inventory tags hanging! There many designs of kris and spears here.

Royal Gallery - Information about the lineage Kedah-Perlis Sultanate as well as items used for royal ceremonies were displayed here. There were also some old picture past royal ceremonies.

Cultural Gallery - Items used by the people of Perlis in daily life. It's an agricultural state, so there no surprise that most things on display were related to paddy cultivation and fishing. There were actually quite a lot of items and all of them were adequately described.


Conclusion
The museum almost does not have any historical reference to other parts of the country or Asia, however, it is a great place to learn about the history of Perlis and its people. Plus, the garden at the back is a nice place for a evening walk.
Perlis
Location: Kangar, Perlis,Malaysia